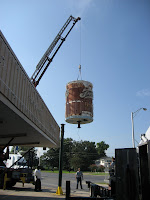 On Saturday August 25, 2007, the LaPlace Frostop mug came down to receive a complete makeover. The crew from American Sign Maintenance showed up bright and early on that Saturday morning to take the mug down from its home on the pole. The mug was taken down and then fitted with a base for the transfer to Hahnville, Louisiana. 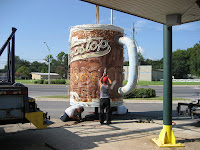 After the mug was welded to a base it was picked up and put on a trailer for the ride across the river. It was hard watching it drive away. 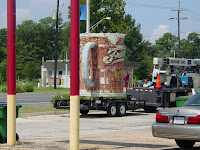 It was easy to see once the mug was closer to eye level just what kind of shape the mug was in - and that was terrible. Almost 50 years of exposure to the elements had really done the metal skin in! The old mug sure was rusty. It would be in for an "extreme" makeover mug style. 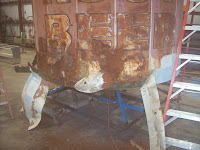 Once the mug made it to Hahnville, it was time to take off the neon to be reused and strip away the VERY rusted sheet metal. The fiberglass foam and handle was to be saved to use again. The new aluminum would go on the inside skeleton which would also be reused. 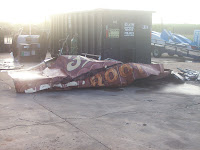 American Sign was e-mailing us pictures to keep us updated on our mugs progress. When we got the above picture we were all a bit sad. Even though we knew the mug was in terrible shape, to see the old skin crumpled on the ground was depressing! 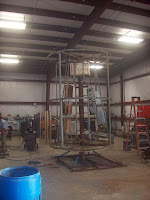 The original frame, transformers, and rotation unit are shown on the left. 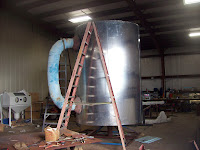 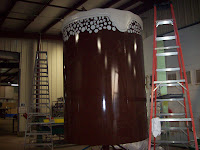 The new aluminum skin went on the frame and the new mug took shape.

As the pictures kept coming by e-mail we could see our new mug really starting to take on the right look. 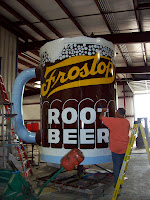 By the time we saw this picture we knew the mug was going to look outstanding. We decided to check the mug out in person and drove across the river to Hahnville to see all the details in person. We actually had them paint in a bit more detail such as the droplets going down the mug. When we got this picture we knew it wouldn't be long before the mug would be coming home! 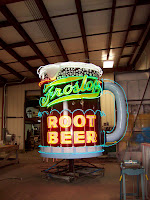 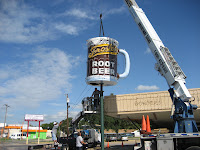